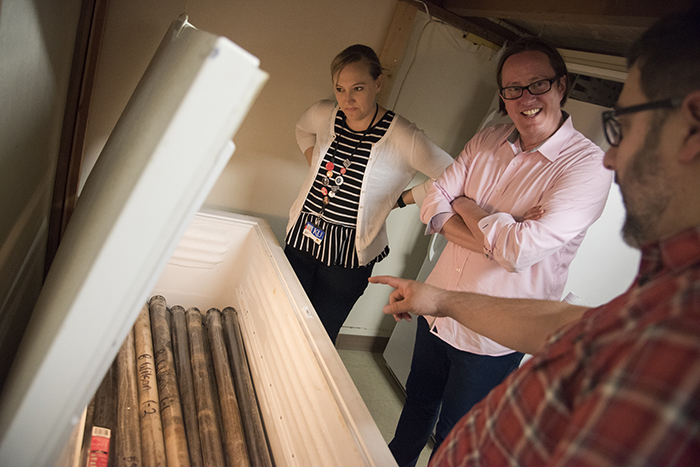 LAWRENCE — If a university has an art museum, shouldn’t it be a place where artistic and academic endeavors come together?

That was the idea that earned the Spencer Museum of Art at the University of Kansas a major grant from the Andrew W. Mellon Foundation to launch the Integrated Arts Research Initiative (IARI), which included hiring Joey Orr as curator for research. Orr has been on campus since January, and, among other things, he is working with university professors and outside artists and scholars on a series of exhibitions and events that will start in the fall.

“We will be looking at both artists and scientists as makers of things that are worthy of cultural contemplation,” Orr said.

Saralyn Reece Hardy, the museum’s Marilyn Stokstad Director, said the Mellon Foundation’s support for IARI builds on its previous grant made to the Spencer Museum in 2008 “to expand our work as an academic center at KU, creating more bridges to various academic disciplines in terms of teaching curriculum.” This supported the museum’s creation of an academic programs department.

Orr, who has an interdisciplinary doctoral degree from Emory University, said his position at the museum is one of a kind.

“I’m the curator for research, which typically means the job is to get the museum’s permanent collection incorporated into university curriculum, but the Spencer already does that,” he said. “My position is unique in that they have asked me to go a step further and engage researchers working in the sciences and the humanities from around the university and beyond in hybrid, collaborative projects.”

Reece Hardy said the notion of a curator for research had been in the works for years.

“It became apparent that our role was to integrate the arts into the research agenda of KU,” she said. “One way that is especially relevant at the Spencer Museum is that the objects and ideas one encounters are all designed to create a sense of questioning – about the self, about society, about our views of the past and speculations on the future. The overarching idea is to create a space for arts in the university’s research portfolio.”

Orr’s job is to build on that ongoing effort. He says it boils down to two things: “Serve the KU community and engage national and international scholars and creative professionals.”

“What they do depends on what’s going on with museum exhibitions and programming at the time,” he said.

The first graduate-student fellow, Marco Polo Camacho, whose focus is the philosophy of science, has been working with the museum’s Associate Director Stephen Goddard on the exhibition “Big Botany,” scheduled for spring 2018. The exhibition will address humanity’s complex relationship with the plant world.

Another part of IARI’s mission is to bring external scholars and creative professionals to the museum each year. For the fall, Orr has lined up two individuals whose work complements the themes of “Big Botany.”

First up is Kath Weston, an anthropologist from the University of Virginia–Arlington who just published the book “Animate Planet,” and Claire Pentecost, an artist from Chicago who takes soil samples and exposes them through a photographic process to make stains on paper.

Orr will curate an exhibition that includes work by Pentecost, artists in the museum’s collection and KU researchers. The show, on view in September and October, is titled “Terra Anima.”

“The idea behind the exhibition is that soil is not inert, but rather a living, changing ecosystem,” Orr said. “There will be artists in it, but we are also exhibiting scientific, pedagogical tools.”

Some of the tools on display will come from IARI’s summer faculty fellow Dan Hirmas, a KU professor of geography & atmospheric science who studies soil morphology. Orr said the exhibition will display some of Hirmas’ core samples — 5 feet deep and mounted on boards — that he uses in geography labs. Also on view will be items from KU Geology Professor Steve Hasiotis.

“He makes what are called organismal trace pourings. He takes plaster of Paris and pours it into an ant burrow, for example. Then once it hardens, he digs it up to reveal its form,” Orr said.

Orr noted that the soil cores and trace pourings will have to go through a two-stage freezing process to ensure no live critters get into the museum.

Additional IARI programs will include lectures, field trips and roundtable discussions that thematically coincide with the museum’s programming, allowing KU professors to share their research with the visiting scholars and artists.

“We hope this can become a prototype for other university art museums to galvanize their collections, as well as their creative power for higher education,” she said. “This model is particularly important for public research universities, because the arts are for everyone.”