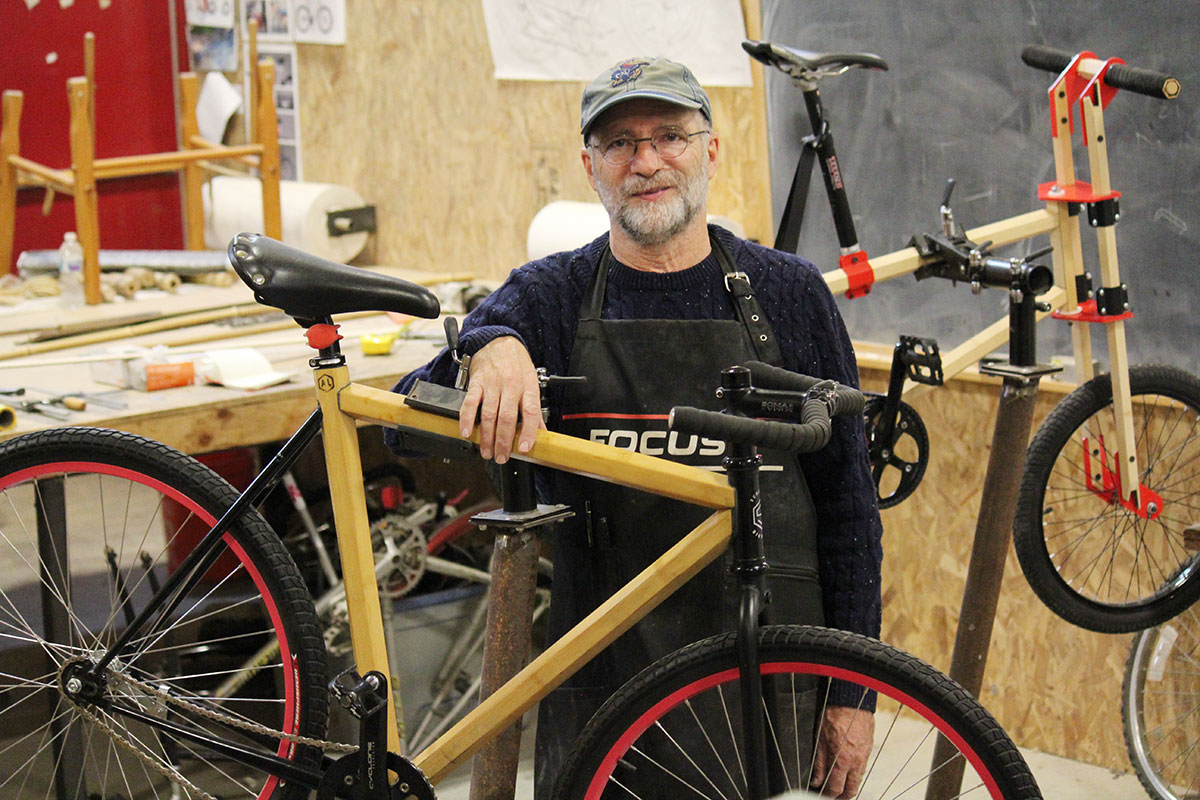 The museum website says “Shifting Gears” features “stories of innovation, freedom, class, gender, manufacturing and history” and “will encourage visitors to think about how design can make the world a better place. The show features design from World Bicycle Relief, ARTCRANK, Envision Unlimited and individual designers and collectors.”

Rake, an avid cyclist and KU professor of design, began working with bamboo to make bikes seven years ago. At the time, he was working at HERObike, a nonprofit bike shop in Greensboro, Alabama, in a region where he saw a lot of bamboo growing.

“In the late 1800s, during Reconstruction, a lot of bamboo was planted in the area, but it was never used for much,” Rake said. “Now it’s considered a nuisance or an invasive species. I was trying to find ways to use a local resource and maybe create craft-based jobs building something out of bamboo.”

So, inspired by his father’s hand-crafted bamboo fly-fishing rods (“high performance, but heirloom quality,” he said), Rake began experimenting with hexagonal tube frames made of cut bamboo and reinforced from the inside with composite carbon fiber.

The result, Rake said, is a bike whose frame is stiff enough but “with a smooth ride that is typical of bamboo.”

He dubbed the design the Semester Bike, after the Swedish word for “vacation.” And while the shop in Greensboro produced a few hundred bamboo bikes, it’s no longer in production.

Nonetheless, Rake has continued to experiment with bamboo in his corner of Arc/D’s cavernous East Hills Design-Build Center. That’s where he was last week, polishing up the Semester Bike he has personally ridden for the past year or so, preparing to ship it to Chicago for the exhibition. He was also tuning up a variation on the design he calls the Flat Pack Bike for the show.

The latter design is much like the original, except that it was designed to be shipped broken down and packed in a flat box, “like IKEA,” Rake said, as opposed to the fully built Semester Bike.

Rake heard about “Keep Moving: Shifting Gears” from a friend in the Chicago area and submitted some of his bamboo bike designs to the organizers, hoping they’d choose one of his newer designs. Instead, they chose two “classics.”

“They wanted to take a look forward to contemporary bicycle design,” Rake said. “You usually think of that as being these slick, aerodynamic, nine-pound, carbon-fiber bicycles, so I wondered if they would have any interest in mine. I’ve shown my bikes at handmade bicycle shows every year in different parts of the country. And even though exhibitors are showing these incredible $10,000 frames, I still find a lot of interest in the resourcefulness and alternative use of materials that my bikes have. In my mind, anyway, it’s just as innovative and, in some ways, it’s pressing the technology just as far as the carbon-fiber guys do.”