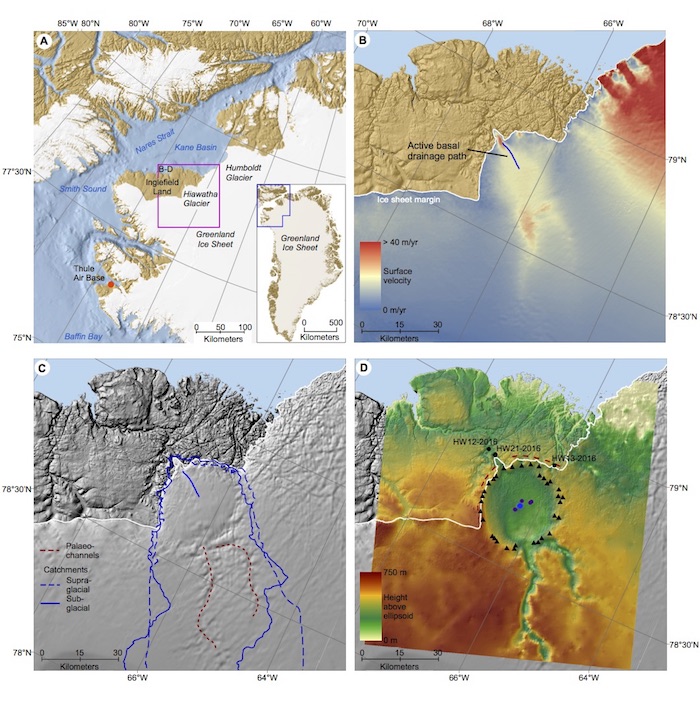 LAWRENCE — A survey of ice in Greenland has uncovered evidence suggesting a kilometer-wide iron asteroid slammed into that island, perhaps as recently as 12,000 years ago during the end of the Pleistocene. The resulting 19-mile-wide impact crater has remained hidden under a half-mile-thick ice sheet until now. It recently was exposed by an ultra-wideband chirp radar system developed at the Center for the Remote Sensing of Ice Sheets (CReSIS), headquartered at the University of Kansas.

The impact crater beneath the Hiawatha Glacier in remote northwest Greenland is detailed in a new paper in Science Advances published today.

It was identified with data collected between 1997 and 2014 by KU for NASA’s Program for Arctic Regional Climate Assessment and Operation IceBridge, and supplemented with more data collected in May 2016 using the Multichannel Coherent Radar Depth Sounder (MCoRDS) developed at KU. 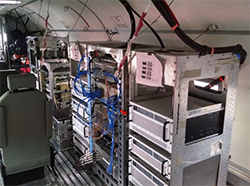 “We’ve collected lots of radar-sounding data over the last couple of decades, and glaciologists put these radar-sounding datasets together to produce maps of what Greenland is like underneath the ice,” said co-author John Paden, courtesy associate professor of electrical engineering & computer science at KU and associate scientist at CReSIS. “Danish researchers were looking at the map and saw this big, craterlike depression under the ice sheet and looked at satellite imagery and — because the crater is on the edge of the ice sheet — you can see a circular pattern there as well. The two combined made a really strong case for this being an impact-crater site. Based on this discovery, a detailed radar survey was conducted in May 2016 using a new state-of-the-art radar designed and built by KU for the Alfred Wegener Institute in Germany.”

Paden, who helped develop the MCoRDS radar signal processing software, participated in low-altitude flights in a grid pattern over the impact crater to detail its dimensions. 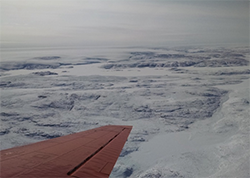 “You can see the rounded structure at the edge of the ice sheet, especially when flying high enough,” he said. “For the most part, the crater isn’t visible out the airplane window. It’s funny that until now nobody thought, ‘Hey, what’s that semicircular feature there?’ From the airplane, it is subtle and hard to see unless you already know it’s there. Using satellite imagery taken at a low sun angle that accentuates hills and valleys in the ice sheet’s terrain — you can really see the circle of the whole crater in these images.”

To confirm the satellite and radar findings, the research team performed subsequent ground-based studies of glaciofluvial sediment from the largest river draining the crater. The work showed the presence of “shocked quartz and other impact-related grains” that include glass. The research team believes these rocks and glassy grains are likely produced from impact melting of grains in the meta-sedimentary bedrock. 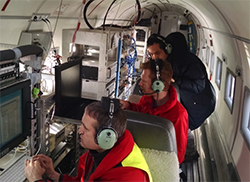 Work remains to determine with more precision the timing of the asteroid impact on Greenland. The authors write evidence “suggests that the Hiawatha impact crater formed during the Pleistocene, as this age is most consistent with inferences from presently available data.” However, even this broad range in time remains “uncertain.” Southwest of the crater, the team has found a region rich in possible debris ejected from the impact, which could help to narrow the date range.

“There would have been debris projected into the atmosphere that would affect the climate and the potential for melting a lot of ice, so there could have been a sudden freshwater influx into the Nares Strait between Canada and Greenland that would have affected the ocean flow in that whole region,” Paden said. “The evidence indicates that the impact probably happened after the Greenland Ice Sheet formed, but the research team is still working on the precise dating.”

Other KU personnel involved in the research that revealed the impact crater include Rick Hale, Spahr Professor and chair of the Department of Aerospace Engineering and associate director of CReSIS; Carl Leuschen, associate professor of electrical engineering & computer science and director of CReSIS, and Fernando Rodriguez-Morales, courtesy assistant professor of electrical engineering & computer science. The KU researchers collaborated closely with colleagues from the University of Copenhagen and the Alfred Wegener Institute in Germany.

Paden said during the three years between the crater discovery and publication of the team’s findings, it was gratifying and exciting to be part of the exclusive group of scientists that knew of the massive impact.

“It was really cool — it was the kind of thing where I went home and told my kids about it,” Paden said. “I said, ‘Look at this! It’s underneath the ice.’ It’s one of those fun moments. They were impressed. A lot of times, my research isn’t that interesting to them, but this impact crater was something they could connect to.”