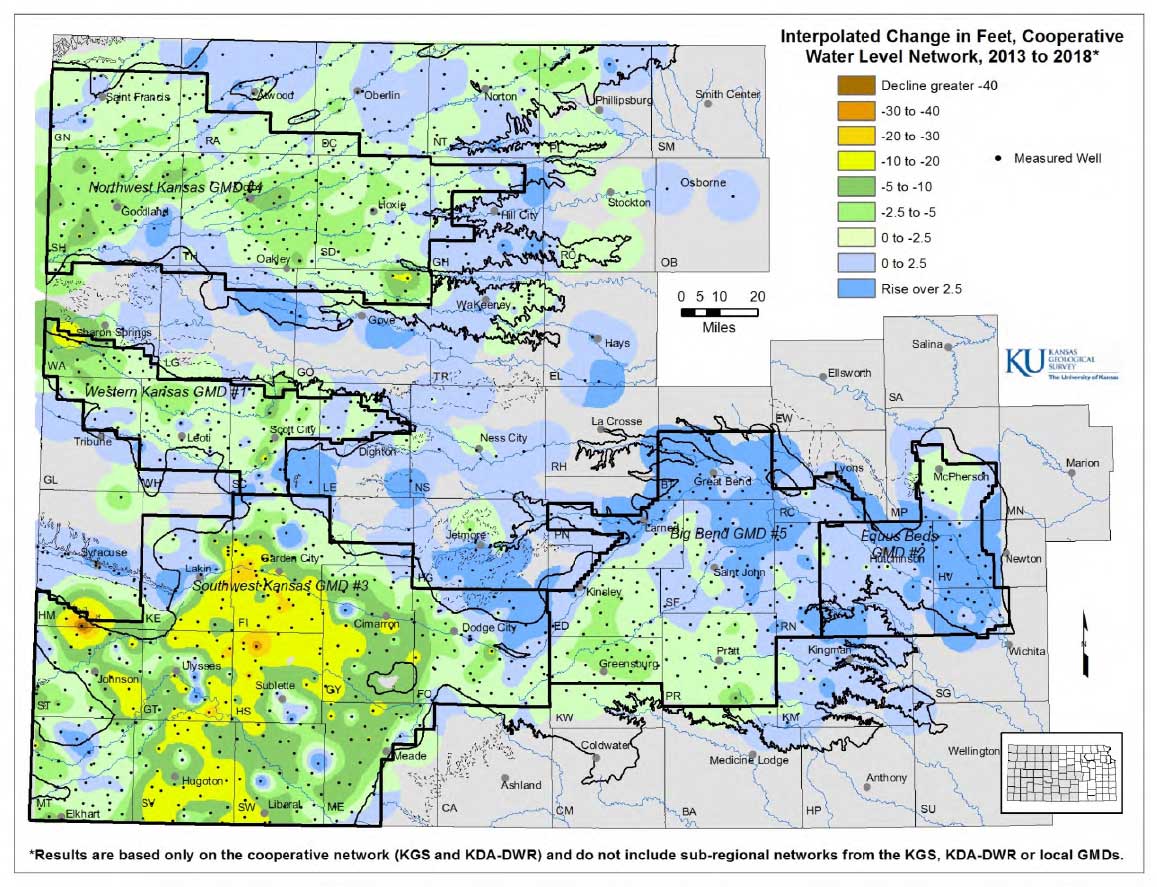 The KGS — based at the University of Kansas — and the Division of Water Resources (DWR) of the Kansas Department of Agriculture annually measure levels in about 1,400 water wells in western and central Kansas. The collected data are used to monitor the condition and long-term trends of the High Plains aquifer, the state’s most valuable groundwater resource, as well as smaller deep and shallow aquifers.

The High Plains aquifer is a network of water-bearing rocks that underlies parts of eight states and, in Kansas, comprises three individual aquifers—the far-reaching Ogallala aquifer that makes up the majority of the High Plains aquifer, the Equus Beds around Wichita and Hutchinson, and the Great Bend Prairie aquifer in the center of the state. Ninety percent of the measured wells draw from these three aquifers.

Water level changes or stability in the Ogallala aquifer in western Kansas correspond primarily with the amount of water withdrawn for irrigation, which in turn is influenced by the rate and timing of precipitation.

“Much of the western border of Kansas and eastern Colorado saw above normal precipitation patterns in 2017, especially through most of the growing season,” said Brownie Wilson, KGS water-data manager. “As a consequence, water levels were at or above the 2016 levels in much of the region.”

Water level increases in western Kansas mainly occur when the levels in wells rebound as pumping slows. Recharge — water seeping down from the surface — is negligible in western Kansas. In central Kansas, where the aquifer is shallower and average precipitation is higher, recharge can make a difference.

“For areas that have higher local recharge capabilities, such as along and north of the Arkansas River in the Equus Beds and Great Bend Prairie aquifer, precipitation generally influences both pumping and recharge,” Wilson said. “There you can get large swings in declines and rises from year to year.”

The 2017 growing season around the Equus Beds was fairly dry, which led to low recharge and higher withdrawal for irrigation, industry and municipal water supplies. Consequently, the Equus Beds declined nearly 2 feet. The Great Bend Prairie aquifer, which encompasses Great Bend, Kinsley, Greensburg and Pratt, fared better with an increase of about a quarter of a foot.

Most of the wells in the network monitored by the KGS and DWR are within the boundaries of the state’s five Groundwater Management Districts (GMDs), which are organized and governed by area landowners and local water users to address water-resource issues.

In Southwest Kansas GMD 3, average levels dropped just 0.05 feet, the lowest decline there since since the state began administrating the water-level program in 1996. In comparison, the average level fell a total of 23 feet over the previous 10 years.

“Water levels were notably higher in Morton County and along and north of the Arkansas River,” Wilson said. “Still, there were localized areas in the GMD that experienced declines of 1 to 3 feet.”

Even with better overall measurement results in the region for the year, the aquifer is nearly depleted in places.

Wells monitored in GMD 3 are drilled into the Ogallala aquifer except in a few areas where they draw from the deeper Dakota aquifer. The district includes all or part of Grant, Haskell, Gray, Finney, Stanton, Ford, Morton, Stevens, Seward, Hamilton, Kearny and Meade counties.

Another rare water-related event in the region occurred in the summer of 2017 when the Arkansas River flowed in Garden City. The river there has been mainly dry for decades due to high water use and less river flow from Colorado. When there is surface water in the river, it interacts with groundwater in an adjacent shallow alluvial aquifer.

Western Kansas GMD 1 experienced a slight drop of 0.19 feet in 2017 following a 0.55 feet in 2016. Although decreases there have been less drastic than farther south, annual levels have risen only twice since 1996. The GMD includes portions of Wallace, Greeley, Wichita, Scott and Lane counties, where the majority of wells are drilled into the Ogallala aquifer.

Northwest Kansas GMD 4 had an average increase in water levels of 0.33 feet after falling slightly in all but two year since 1996. GMD 4 covers Sherman, Thomas, Sheridan and parts of Cheyenne, Rawlins, Decatur, Graham, Wallace, Logan and Gove counties. Groundwater there is pumped almost exclusively from the Ogallala aquifer and shallow alluvial sources associated with streams.

Big Bend GMD 5 had an average increase of 0.26 feet following an increase of 0.88 feet in 2016. Since 1996, annual levels there rose nine times and fell 13 times. The GMD is centered on the Great Bend Prairie aquifer underlying Stafford and Pratt counties and parts of Barton, Pawnee, Edwards, Kiowa, Reno and Rice counties.

Equus Beds GMD 2, a major source of water for Wichita, Hutchinson and surrounding towns experienced a decline of 1.93 feet, which followed an increase of 2.08 feet in 2016. Since 1996, annual levels there rose nine times and dropped 13 times. The GMD covers portions of Reno, Sedgwick, Harvey and McPherson counties.

“Even with the big declines in GMD 2, this is one of the best years we’ve seen in quite a long time,” Wilson said.

The KGS measures approximately 570 wells in western Kansas each January, and DWR staff from field offices in Stockton, Garden City and Stafford measure about 220, 224 and 360 wells in western and central Kansas, respectively. Most of the wells, spread over 48 counties, are used for irrigation and have been measured for decades.

Measurements are taken primarily in January when water levels are least likely to fluctuate due to irrigation. Infrequently, however, later-than-normal pumping during dry conditions may affect measurement results.

The results are provisional and subject to revision based on additional analysis. Data by well will be available in late February at http://www.kgs.ku.edu/Magellan/WaterLevels/index.html.